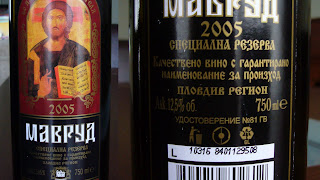 I like the evenings with friends at home. We had one of those lovely  evenings on last Saturday. We were three ladies and one gorgeaus man :), so we talked about man, women, most recent gossips and drank wine. They brought us a bottle of wine from Bulgaria and a pack of fresh Turkish coffee. Coffee is still waiting in the kitchen but the bottle was empty in one hour after they came to us.

The wine was a gift to one of our friends by another friend of her, who recently visited Bulgaria. She thought that she would not drink it alone, good for her 🙂 So, we drank it all together. Everything on the bottle was written in Bulgarian. So, I don’t have any idea about the grapes or about specialties of the wine, if there are any.
It was a wine of 2005 with settled but not dissappeared fruity aromas. There was no sediments in the bottle at all, but the wine’s red color was so light and transparent as it usually is in old wines. It has marked tannins, similar to Bogazkere of Turkey, but they almost dissappeared after a while of resting in the glasss. It was a nice wine at the end. We drank it all and continued with another wine.

Welcome to my blog!

I write here to share my journey to discover wine, because I know it would not be so fun if I did not share it!

If there is a problem in the post that you'd like to read, please try inpursuitofflavor.blogspot.com for the posts that I wrote before September 2015.